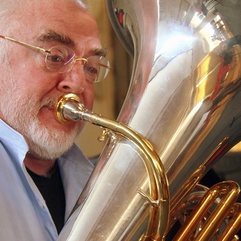 Roger Bobo is a brass legend and is recognized as an orchestral tubist, soloist, and teacher. He was first a member of the Rochester Philharmonic, then the Concertgebouw Orchestra, and finally the Los Angeles Philharmonic Orchestra. As a soloist he has performed around the world and was a member of the famed Los Angeles Brass Quintet. At a time when tuba was not considered a solo instrument, he raised the level and standard to new heights.

Roger discusses his teaching career in Part 2, and what it has been like to teach in Switzerland, Italy, England, Japan and now Mexico. Some of the teaching was a study in contrasts, for example the difference between students in Japan and Italy!

In the Bonus Room, I had to (of course) ask Roger about eating and some of his favorite cuisine! Roger has also been around some of the greatest performers of our time, including when he realized that Pavarotti stole his warm up (sort of). We end with a story of a concert he and I did at a beautiful castle in the mountains in Italy, and how someone in the audience asked us during intermission if we were sight reading... and Roger’s positive and hopeful answer!